Low soil moisture may lead to a spring with no major floods in South Dakota.

Weather officials say March precipitation improved drought conditions in the state. The west and southeast are now in moderate to severe drought.

Climatologist Pat Guinan says drought conditions for most of the Midwest may worsen this summer.

“Even all of the Corn Belt is forecasting a slight enhanced likelihood of above normal temperatures this summer. That dryness, it looks like, was shifted a little bit further north and northeastward for the summer for below normal precipitation with the highest likelihood extending from Montana through most of the Dakotas, western Minnesota, northwest Iowa, all of Nebraska and northern Kansas.”

Doug Kluck directs Midwest climate services for the National Oceanic and Atmospheric Administration. He says a weather pattern that brings cold weather to the upper portion of the United States is dying down but may remerge later this year.

“There is evidence that, for two years in a row, La Niña will occur this fall. That’s when it usually rematerializes.”

The National Weather Service reports a higher than average chance of precipitation for most of the state through the end of March. Meteorologists expect South Dakota to see above average temperatures from now until June. 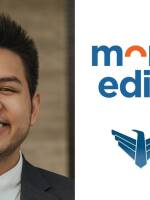