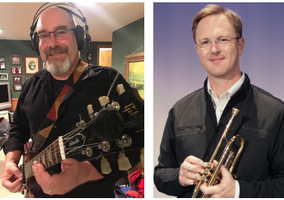 Patrick Baker, Executive Director of the South Dakota Arts Council, and Jim Spiers, Executive Director of Arts South Dakota, will talk about the role of the arts in our economy, in our communities, and for visitors during this free online program sponsored by the South Dakota Art Museum Guild. Tuesday, February 23, 9:30 - 10:30. Register to attend on the South Dakota Art Museum website: https://www.sdstate.edu/south-dakota-art-museum/guild. Patrick Baker joined the staff of the South Dakota Arts Council in 2016, becoming the fourth executive director of the Council in the agency’s 50th anniversary year. Prior to joining the SDAC staff, Baker served as the communications director for the S.D. Department of Human Services for over three years. He also served the state in 2012 as an elections coordinator in the Secretary of State’s office. A native of Pierre, S.D., Baker holds a journalism degree from South Dakota State University and earned a graduate certificate in the S.D. Governor’s Leadership Development Program through the University of South Dakota in 2015. He worked for various newspapers in South Dakota, Arizona, and Minnesota as well as serving as the senior editor of a website magazine devoted to professional fishing prior to entering the field of public service in his home state. Baker has been active in the arts throughout his life, with a focus on music. He is a founding member of the band Houdek and is a member of Pierre Four, a men’s vocal quartet. He frequently performs in an acoustic trio called Bakers3 with his wife, Jennifer Baker, with whom he also writes and records music. The Bakers also sing in a local church choir and are enjoying expanding the family musical experience to include their son, Jack, who plays keyboards and percussion in Houdek and Bakers3. Jim Speirs is an experienced arts administrator and a working musician. Speirs was touring and operations coordinator for the South Dakota Symphony Orchestra and membership coordinator for the Washington Pavilion, as well as alumni programs coordinator for the SDSU Alumni Association. He is an active jazz musician with the JAS Quintet, the Sioux Falls Jazz & Blues Society’s educational touring program the “Jazz Diversity Project,” the Hegg Brothers touring “Holiday Jam” and a jazz education concert series called the “Jazz Currators.” His touring groups are on the South Dakota Arts Council’s touring arts roster. Jim most recently worked as an Account Executive for Fresh Produce, a boutique marketing agency in Sioux Falls. He served as president of the board for the Dakota Sky International Piano Festival and was a South Dakota Arts Council member for 7 years. He currently is the founding Executive Director of Arts South Dakota, a statewide arts advocacy non-profit. Speirs grew up in Rapid City, SD and graduated with a degree in music from South Dakota State University. This is the second 2021 program in this year's virtual South Dakota Art Museum Guild talks. Join us for lively conversation and interesting speakers from across the U.S. with ties to South Dakota and the South Dakota Art Museum. View past programs and plan to attend future programs: https://www.sdstate.edu/south-dakota-art-museum/guild. Registration is required: https://sdstate.zoom.us/meeting/register/tJ0pduGhrDojGdcw76ge6QoE-8cMIoZ7UCo_.